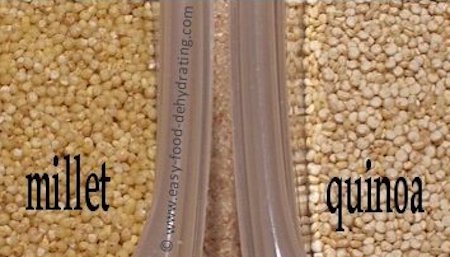 Millet and Quinoa have been around for centuries.

Millet is thought to have originated in China or India. It has been cultivated for thousands of years and was once a staple grain in many parts of the world.

Today, millet is grown in many countries, including the United States, Russia, and Australia.

Quinoa is a grain that is native to South America. It was first cultivated by the Incas in present-day Peru.

Millet and Quinoa, but first... Millet

First, I'll go over Millet. It's widely grown around the world and has many uses—from nutrition to alcoholic beverages to porridge!

Millet is very rich in B vitamins, especially Niacin, B6 and Folic Acid, Potassium, Zinc and Calcium.

Millet is a small, round grain that is often used in birdseed. However, it can also be consumed by humans. Millet is a good source of several nutrients, including protein, fiber, and vitamins.

When cooked, millet has a fluffy texture and a mildly sweet flavor. It can be used in a variety of dishes, including pilafs, casseroles, and soups.

Millet is a good choice for people who are looking for a gluten-free grain option. It is also suitable for vegans and vegetarians.

The protein content (11% by weight) in millet is comparable to both flour and wheat. 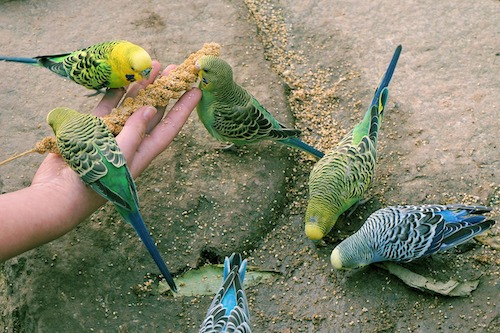 Image by Andreas Lischka from Pixabay

As a kid I used to have a budgie* named Mickey who used to have millet on the sprig pushed through his birdcage bars! He'd get those seeds everywhere!

(*The full name for a "budgie" is budgerigar, similar bird to a parakeet).

Birds like to eat millet because it is a good source of protein and other nutrients. Additionally, the small size of the grain makes it easy for birds to eat.

Millt is an important ingredient in our diets. I add it to my soups and cauliflower mash. Millet (and quinoa) are used in my super-tasty and delicious chicken chow dog food recipe.

I do rinse the millet in a fine sifter under running cool water before use, although it doesn't have the bitterness of quinoa.

The photo at the top of the page is pretty much 'actual size'. I keep it in separate plastic containers for daily/weekly use. When it's time to refill, I scoop it out of the big plastic bags that it ships in. It's easier for me this way.

Just like millet, quinoa has also been around for centuries. Quinoa's protein content is very high—between 12% to 18%! It is a complete protein source—it contains the essential amino acids the body needs.

Quinoa has become increasingly popular in recent years due to its nutritional value. It is a good source of protein, fiber, and vitamins.

Note: quinoa is pronounced 'keen-wah.' It is a good source of fiber and is high in Magnesium and Iron too.

Quinoa can be used in a variety of dishes, including salads, soups, and casseroles. It can also be cooked and eaten as a hot cereal.

The good news is that quinoa is gluten-free, so it makes it easier to digest for many folks.

I use quinoa in my cauliflower mash and in many soups to add an excellent source of protein. Quinoa (along with millet) is also added to the "Make Your Own Dog Food" recipe mentioned above and can be found here: chicken chow dog food recipe.

Can Quinoa be Eaten Raw?

Yes, quinoa can be eaten raw. However, it is typically soaked or cooked before consumption. This helps to remove the saponin coating, which can taste bitter, more on that, below.

Soaking or cooking also makes the grain easier to digest. 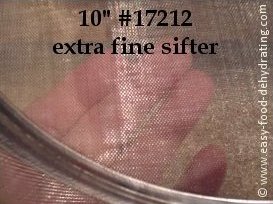 You must rinse quinoa before use, as it has a bitter tasting coating and is called saponin, as mentioned above. Saponin is a natural pesticide that protects the grain from insects and birds.

Some people remove the saponin before cooking, while others simply rinse it off. Quinoa that has been pre-rinsed or pre-soaked may have a slightly different flavor and texture.

Simply rinse the quinoa under cool water in a fine sifter. The sifter (or sieve) I use is from Fantes.com and is a 10-inch Stainless Steel Extra Fine #17212. Around $20.

They have a 9-inch sifter (#18889) which is equally suitable for about $4 less. It is an excellent product!

This extra fine sifter can also be used to dust your baked goods (with powdered sugar). I don't mean to clean it with a cloth! LOL.