The Wrath of Hurricanes
Frances and Jeanne 2004

We were completely unaware of Hurricanes Frances and Jeanne, back in 2003—as we were enjoying our Labor Day party complete with hot dogs and burgers, etc. in my dad's new spacious workshop. Read about hurricanes here. 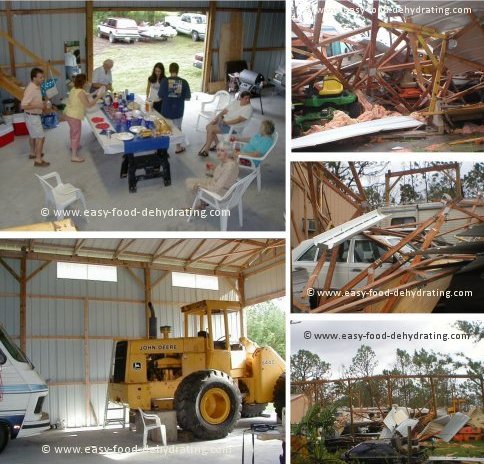 Before and After
Hurricanes Frances and Jeanne

Looking back at those photographs now, it's hard to believe that just a year later the workshop was completely destroyed!

Not One, Not Two, Not Three...
But FOUR Hurricanes!

In 2004, we Floridians experienced not one, not two, not three, but four crisscrossing hurricanes. Personally, we got hit by both hurricane Frances and Jeanne, which followed a brief two weeks after Frances. Both times we experienced power outages.

The other two storms were northwest of us.

After our two storms, namely hurricanes Frances and Jeanne, we spent a few hours surveying the damage, and then got right to work, picking up the pieces, and rebuilding anew.

At this point, all our physical energy came from the inner relief that all our family's homes were still standing, albeit with minor damage. We figured that a freak mini tornado completely destroyed the workshop.

Thanks, Hurricanes Frances and Jeanne

Thanks a lot, hurricanes Frances and Jeanne.

It was a feeling like you'd just attended a funeral, and you were thankful that you were still alive. Obviously not joyful, but subdued.

FPL (Florida Power and Light) to the Rescue 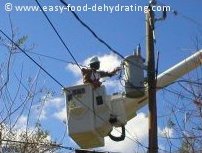 After living in Florida for almost 25 years (before of hurricanes Frances and Jeanne), this was my first experience with survival after such weather devastation.

We had no power for at least a week and when the electrical crews came out en masse; we felt like hugging the guys who were working tirelessly around the clock to restore power to all.

Kudos to FPL (Florida Power & Light) and all the other 'power restoration specialist' crews who came from around the USA to help FPL restore power in record-numbers and in record-time.

Thankfully, it was October, so the oppressive heat of midday wasn't as bad as the previous months! At night, we slept with the windows open so that we could feel a slight breeze.

We used candles for light and scooped water either out of the bathtub we'd filled previously, or taken straight out of the swimming pool. With this, we bathed as best we could. We had prepared for drinking water, so this we had on hand.

All this reinforced just how much we rely on electricity for power. 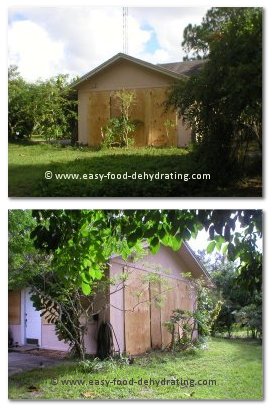 If you've never been in a "be prepared" situation, then you won't know just how exhausting it is simply putting up plywood on the windows.

It was a day's worth of hard work, but obviously it was well worth it—as the little home came through the storms pretty much unscathed.

I'm embarrassed to show you these pictures, really, as it makes our home look like an abandoned shack... (after the storms passed, we treated the home to a new exterior paint job AND a new roof—she deserved it).

Mealtimes Were Not "A Piece of Cake"

Mealtimes were a challenge, because of no electrical power. Thankfully, our kitchen stove ran off propane, so we had it good compared to our relatives who weren't "cooking with gas".

Cleaning the dishes was especially tricky—you had to make sure you kept clean dishes away from dirty dishes, all the while in a somewhat darkened room—remember we had no kitchen ceiling lights!

We had to eat all the fresh foods as fast as we could from the fridge, but honestly, there's only so much you can eat in a day. After three days, the remaining fresh food had to be dumped. What a waste.

As mentioned above, hurricane Frances was a wake-up call we were semi-prepared for (lovely plywood on the windows) and we'd just about taken it all down, when hurricane Jeanne did a loop-the-loop and came back onshore and hit us. This time we thought we were old pros. But it was this hurricane that demolished the workshop.

We were more vulnerable this time around as the ground was still overly wet from all the previous rain, making the trees susceptible to toppling. We lost a few.

It's times like these that make families and neighbors come together, to look out for each other—to make sure that everyone is okay. Bob, our neighbor, popped over a few times to give us power updates as FPL worked their magic down the street.

Thanks For The Memory

Looking back, it was quite an exhilarating time, but would I want to live like that all the time—without power? No—but at least we all learned a lot from the experience.

Our takeaway:You need to have enough food on hand to live for more than the three days that we had. So now I have dehydrated food put away, so I'm much better prepared.

We are now properly prepared as we have one of those bigger automatic generators. It enables us to cook meals in the crock-pot with ease—until FPL arrive to work their magic again!

10 THINGS
YOU MUST HAVE