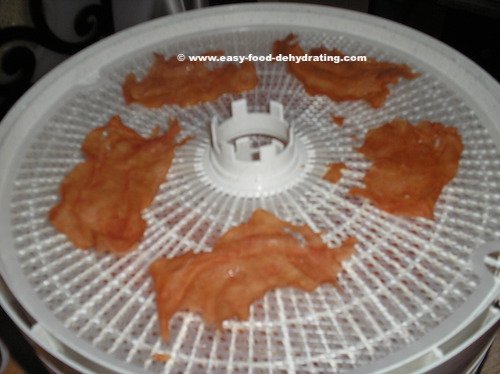 Dehydrating Turkey is So EASY to Do!

Dehydrating turkey that is pre-cooked and pre-sliced couldn't be easier! So off to the refrigerator I went and took out a 9 oz. plastic tub of sliced Turkey I'd bought from Target Stores.

These 'before' and 'after' photos (below) are of the sliced turkey on the dehydrator. Notice how much they shrink!

NOTE: the tray on the right was a tray that had five slices on initially, not three. (I think "someone" ate two of them ...)

As with the chicken and roast beef pages, I note that you can use your leftover meats (as in whole chicken and turkey, and cuts of beef).

Just cut the meat into "dehydratable" pieces—make the pieces similar sizes—now they will dehydrate uniformly!

REMEMBER to turn
the heat UP to 160°F
never dehydrate meat
on a lower setting,
that's not safe
(germ-wise). 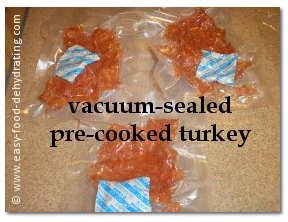 
Back to the store-bought pre-sliced turkey:

The package from Target filled all four of my Nesco Dehydrator trays, with around three slices of turkey on three trays, and four slices on the fourth...

and I couldn't believe that it only took TWO hours to become fully dehydrated!

As you can see in the photo, I purposely draped a slice of the re-hydrated turkey around my finger so you could see that it was indeed moist again, i.e. not straight and crispy!

I was very pleased, to say the least. IMPORTANT: re-hydrate in the refrigerator in CLEAN water. Don't leave it out on the countertop! Don't waste your time and effort and let the turkey go 'off'!

In the other photo you can clearly see three packages of pre-cooked turkey, all vacuum-sealed with their oxy-packs and ready to store.

I will check on these in about a month, to make sure they haven't 'turned' ... because there is fat in meat and we don't want to be eating rancid bad turkey!

UPDATE: Turkey still 'perfectly good' after one month with no refrigeration! :-) 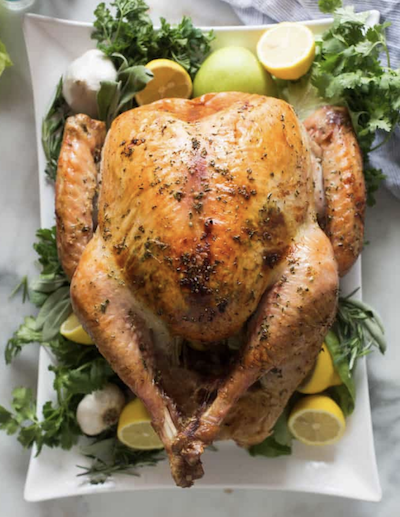 Image and recipe courtesy of Tastes Better from Scratch

I can't wait until next November or December for turkey!

It's from a place called:
Tastes Better from Scratch.

Then you'll be back here – dehydrating turkey leftovers! :-)