When dehydrating chicken, it's much simpler to use pre-cooked, pre-sliced chicken breast, either sliced fresh at the Deli counter, or from meats sold in tubs! 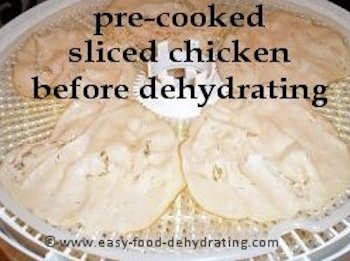 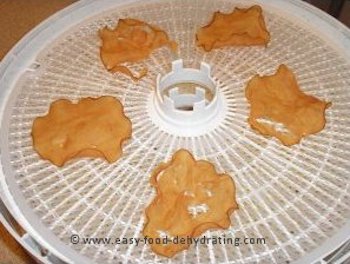 Dehydrating Chicken is Very Easy to do!


It's OK to use Pre-Cooked Sliced Deli Meats!

I used my favorite sandwich meat in a tub: yeah, I sometimes don't have time to stand in line at the deli! And here's one great reason to use pre-sliced: they're always uniformly sliced!

Shown on the dehydrator trays (coming up, below) are slices of pre-cooked sliced Chicken Breast by Hillshire Farms.

The package filled four of my Nesco Dehydrator trays (see below), with five slices on each tray, and it only took TWO hours to become fully dehydrated!

When dehydrating chicken, don't forget to use cooked meats left over from your Sunday Roast Chicken dinner. Make sure you evenly slice the pieces and make them of a uniform size; that way they will dehydrate uniformly—i.e. at the same rate of time.

REMEMBER to turn
the heat UP to 160°F

As you can see in the photo above, just look at how crispy the chicken was after dehydrating! I then purposely draped a slice of the re-hydrated chicken around my finger so you could see that it was indeed moist again.

I also made a small amount of chicken stock (from my favorite Better Than Bouillon) and wow, what a difference that made to the taste of the re-hydrated chicken! Make a note of that! :-)

IMPORTANT: Re-hydrate in the refrigerator in CLEAN water or the stock. Don't leave it out on the countertop! Don't let the chicken go 'off'!

Sarah, in Australia, wants us to know this:

"I do a lot of dehydrating for long hiking trips, and have found that the canned chicken (that looks like canned tuna) in the supermarket (yes sounds gross) is the only chicken I've been able to dehydrate that re-hydrates exactly like it was prior. Taste and texture on re-hydration is perfect for chicken, just remember to buy the low fat canned chicken."

Hi Sarah! That's really great to know! I actually have used the 'canned chicken' in soups and chicken salad! :-) And yes, the low-fat stops rancidity when storing "long term". Thanks so much for posting!

This morning I had Robert S. write in to ask if it's OK to dehydrate cooked pork.

I also thanked him for bringing it to my attention that I hadn't listed PORK (the other white meat!) alongside the chicken, turkey, and beef!