When re-hydrating food, you can see the water is being absorbed and just how far up the jar the vegetables in the water have reached!

Check Out Our "Before" and "After" Photos! 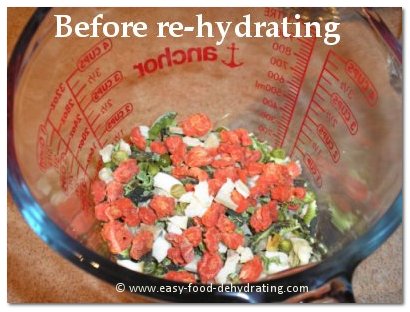 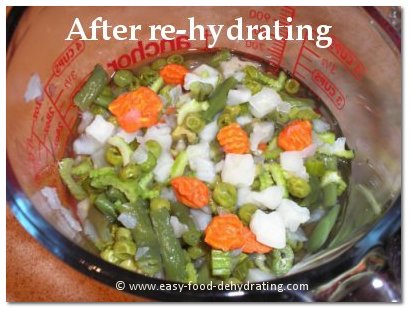 Note: You now have the humble/great beginnings of a very tasty Vegetable Soup.

The magic of re-hydrating food! It's fun to watch it plump back up!

These dehydrated vegetables are from previously frozen bags of crinkle-cut carrots, peas, green beans. There are also some Ore-Ida Hash Brown potatoes in there—along with dehydrated fresh onion, celery, and elephant garlic!

This is the AMAZING PART! Hopefully you've learned a lot from our site about how to dehydrate your foods, so now it's time to put the water back in and re-hydrate the food!

Make Sure To Add Enough Water!

It's really only a case of making sure there's enough water for the foods to drink up while re-hydrating food.

Keep your eye on the food. Add more water if it looks like it'll dry up before your foods are nice and plump again!

Should I Use Hot or Cold Water?

I'll use hot (boiling) water for re-hydrating food when I'm making a recipe that calls for hot 'stock' because my bouillon dissolves better in just-boiled water—but if you know it'll be sitting around a while before you get to use it, then cold (clean) water works fine.

I must make an important point here: if you are re-hydrating food in hot water, please make sure to BRING IT BACK TO A BOIL while you're preparing your recipe. You don't want to have food sitting around in warm water without boiling it again—be safe—don't let any airborne germs get a chance to fester in "warm" food prior to eating it! 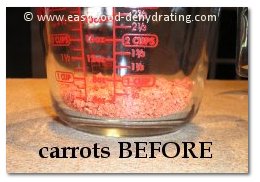 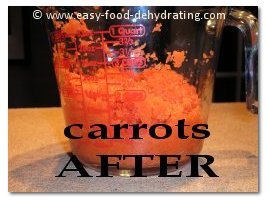 It takes about an hour for small veggies to plump back up in the water; the larger veggies take longer, about two hours. Also note that you may want to cook your re-hydrated veggies a little longer than usual... it helps makes the vegetables taste like whole vegetables again.

Remember, the quality of the water you use while re-hydrating food IS important, as the water is being absorbed by the foods that you are going to eat re-hydrated again—so don't skimp here by using nasty water! By nasty, you know what I mean! If you wouldn't drink it, don't use it! Make sure it's good, clean, drinking water.

If you're making a soup where the vegetables aren't sautéed in olive oil at the start of the recipe, then go ahead and just add them to the water (or soup stock or soup base according to the recipe) in their dehydrated form! They'll plump right up in the water/stock base if you let them sit and cook long enough! Shredded dehydrated cabbage is another vegetable that is great tossed in soup while you're making a pan!

Melba, a good friend of mine, asked me if dehydrated foods lose their nutritional value and how did they really taste when re-hydrated?

Excellent questions Melba! I assured her they keep much of their nutritional value because all that's been taken out is the excess water during the dehydration process... (but like ALL fruits and vegetables, when cooked-to-death, they WILL lose nutrients!)

I will admit that my first effort at re-hydrating carrots yielded somewhat spongy carrots, but when I cooked them a little more, they were fine. They were whole baby carrots and that might have had something to do with the sponginess.

My sliced carrots re-hydrated perfectly! All the other vegetables just come back to life when added to water and it's really quite amazing to see! My favorites are peas and celery! The grated carrots in the above photos were for Deb's Delectable Carrot Cake—check it out, it's delectable, alright!

Take a look at Preparedness Advice—they have a good chart on how much water to use when re-hydrating your dehydrated foods.

Great question Audrey! First, thanks for taking the time to write in.

For a personal portion of carrots, using dehydrated carrots, I'd say a "couple of handfuls" would be enough. Carrots shrink down to at least half their normal size, so just look at a couple of handfuls (assuming you don't have massive hands LOL) and imagine those handfuls to be double that when they're re-hydrated.

I hope this helps, and thanks for asking!

Read how Lori's re-hydrated pasta
turned out – and how it could affect
your bottom line!


Attribution to
www.easy-food-dehydrating.com
Thank You!