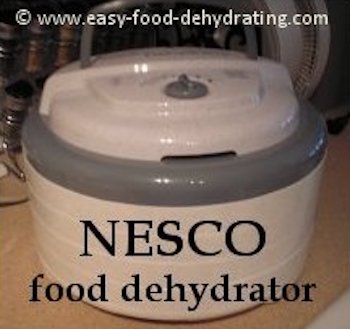 Even Drying ~ From Top to Bottom

According to NESCO®, you get even-drying from top to bottom because of NESCO's Converge-A-Flow® air-flow design.

This is supposed to eliminate the tray rotation, but I still rotate the trays, anyway.

Check out this model in our photo over on Amazon. 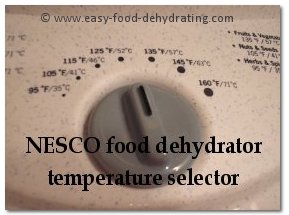 The NESCO® food dehydrator models have a temperature selector on the lid and is easy to read and use.

The NESCO® food dehydrator fan is located on the top inside the lid, (which is better than some models where the fan is at the bottom, as it makes it a breeze to keep clean!)

There isn't an on/off switch on the NESCO® food dehydrator, you just have to plug the dehydrator in and unplug it when you're done. More on that below.

You can buy a 'timer-switch' from hardware stores if you want to have the luxury of the NESCO® food dehydrator turning off, say after ten hours, if you know you won't be home to shut it off! Check out this timer on Amazon.

A neat feature of a NESCO® food dehydrator is that you can stack as many trays as you want, within reason! (You MUST have a minimum of four trays in use; see additional comments coming up).

I feel good about being able to use as many dehydrator trays as needed, rather than having to run the machine with empty trays. Sometimes I'll have just four trays going, and some days seven! 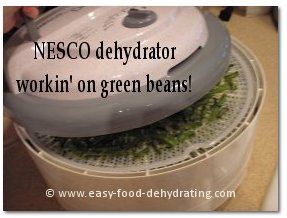 I began with the NESCO®  four-tray model and purchased additional trays.

They come in sets of two at a very reasonable price.

I was pleased that the new NESCO food dehydrator trays color-matched perfectly with the old(er) trays for an almost seamless stacking experience!

I also made sure I had solid fruit roll sheets too, more on these coming up!

Use A Minimum of 4 Trays!

NOTE: NESCO® states you must use a minimum of four trays, whether you've got food on all four trays or not, for the fan to create even-drying.

The only time I ever need to run the dehydrator with less than four trays is when I make fruit roll-ups—I only have two Fruit Roll Sheets that came with the dehydrator so only two trays are actually being used! So I bought two more sheets, but I'm leaving in the following paragraph for those of you who still are operating your NESCO food dehydrators with two roll up sheets.

Keep on scrolling to read more about screens to keep your Nesco food dehydrator clean!

As an Amazon Associate, I earn a small commission from qualifying purchases. The price you pay doesn't increase. 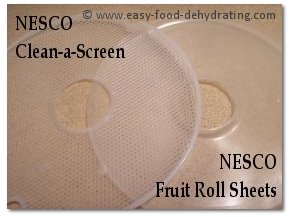 So for now, when only using TWO trays for the roll-ups until you have purchased more fruit roll sheets to make the stack of trays add up to four, add an empty tray (without clean-a-Screens, more on those coming up) in-between the fruit roll trays and one more on top, so that you have the 'four tray minimum' for drying.

NESCO®  food dehydrators also have "Clean-a-Screens" which are circular plastic mesh flexible screens. They have little half-round cutouts for your fingers to enable easy removal of the sheets—and that's great!

They fit neatly into the dehydrator trays and this enables you to keep small foods from falling through to the trays below (as foods shrink when they dry out!)

Also, any sticky fruits/foods clean off really easily from these dehydrator screens—which is their intended purpose. I just soak mine in the sink, then gently scrub away any stubborn particles, but honestly, it's rare that I have to put that much elbow-grease into cleaning them.

My 4-tray model came complete with two Fruit Roll Sheets as mentioned above, and these are like the Clean-a-Screens because they fit neatly into the trays, but these are solid so that the tray's contents CAN'T spill or seep through! Important when pouring puréed fruits to make the fruit roll-ups!

NOTE: Some of you have written in saying that you've been using plastic wrap instead of the NESCO® Fruit Roll sheets—word of caution here! Make SURE you DO NOT cover the center hole in the trays—if you do, you won't get ANY air circulation and you'll likely burn the motor/thermostat out if you forget.

I'd err on the safe side and get more Fruit Roll Sheets because of their affordability.

If you want to check out dehydrator reviews before getting one, then please visit Dehydratorjudge.com for in-depth "Best Food Dehydrator" reviews.
Also read a more about the history of dehydrating food on their website here.

Do You Already Own a Nesco Dehydrator?

Do you already have a NESCO® food dehydrator? Simply use our easy-to-fill-in-form, directly below, to leave YOUR review for all to see, AND you'll have your very own web-page on this website auto-magically!

Simply fill out the form, and leave your review. List your likes (and dislikes) -- it will be helpful to our readers!

What Other NESCO Dehydrator Fans Have Said

Click below to see contributions from other visitors to this page...

4 tray model
Best Dehydrator on the market. I dry mangoes and the Nesco - does it perfectly. I liked it so much I have 2 now. I have tried other machines and they …

nesco fd 75A
I love my dehydrator and been drying everything my family will eat. I bought new trays and screens recently from Amazon but they were a little too big. …

Nesco Professional
Fantastic kitchen appliance. It works great on fruit meat and whatever you want to dry. Fast quiet and efficient. I recommend spraying the trays for easier …

Ancient - But Still Works!
I have a model so old that they do not make it anymore, and I have no idea of the model. I think it was a early version of the Snackmaster but I cannot …

FD-75A
Love my dehydrator. I have my favorite fruits of course. One being Granny Smith apple rings. I have noticed I eat more fruit and have less wasted …

FD-60
I bought my Nesco American Harvest Dehydrator & Jerky Maker today, after using my old Mr. Coffee model for about a week or so. I felt I needed a second …

NESCO FD61P 500 Watt Dehydrator
Best dehydrator I have ever owned. I never have to rotate trays. I have dried jalapeno peppers, okra, potatoes and onions at the same time without flavors …

FD*35
used it twice and now it started up and worked for about 10 minutes stopped working and won't start back up...

Nesco with seven trays
I have the seven tray Nesco and I bought some of those non-stick sheets, they are very handy and have little finger cut-outs on the edges so you can lift …

All Content Copyright © 2010-2023 • All Rights Reserved
Easy Food Dehydrating is powered by
SBI - Solo Build It! - SiteSell
Attribution to
www.easy-food-dehydrating.com
Thank You!