Dehydrating Pork
The Other White Meat!

Have fun by dehydrating pork! In the summertime, we love to cook out and enjoy all of the delicious food that comes with it. One of our favorite things to grill is pork chops. They are a leaner alternative to beef, and they always seem to be a hit with everyone at the table. At Easy Food Dehydrating, we're going to show you how to dehydrate pork chops so you can have them all year long! 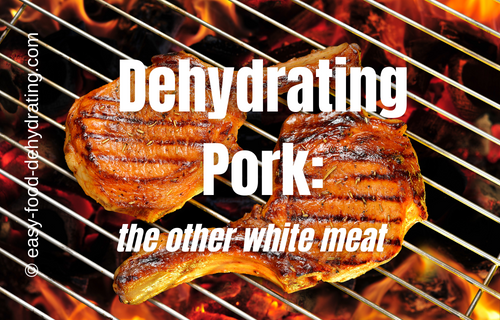 How to Dehydrate Pork

The first step in dehydrating pork is to cut it into thin strips. This can be done by cutting the pork against the grain into thin strips, or by using a meat slicer. After the pork has been cut, it is important to season it with salt and pepper. Then it is ready to be placed on the dehydrator trays.

The pork should be dried at a temperature of 145°F.

for four to six hours, or until it is dry and brittle. Once it is finished, the pork can be stored in an airtight container for later use.

Pork is a versatile meat that can be used in a variety of dishes. It's also a great choice for dehydrating.

There are many different cuts of pork that are suitable for dehydration. Some of the most popular cuts include pork loin, pork chops, and pork belly.

Pork loin is a lean cut of meat that is ideal for dehydrating. It has a small amount of fat, which helps to keep the meat moist during the drying process.

Pork chops are another lean cut of pork that is perfect for dehydration. They have a little more fat than pork loin, but not enough to make them difficult to dry.

Dehydrating pork is a great way to preserve it. It will also give your food some extra flavor. Here are some tips on how to do it:

Do you have a great tip about dehydrating pork? Share it!

Yes, pork can be dehydrated at different temperatures. Higher temperatures will result in a quicker dehydration time, but may also produce a lower quality product.

How to Dehydrate Pork Belly

Pork belly is a fatty cut of pork that is perfect for dehydrating. The fat content helps to keep the meat moist during the drying process.

It's important to trim off any excess fat before dehydrating pork belly. Otherwise, the fat will render out during the drying process and make the meat greasy.

To dehydrate pork belly, start by slicing it into thin strips. Then, place the pork strips on a dehydrator rack and dehydrate at 145 degrees Fahrenheit for 6-8 hours.

Once the pork belly is dry, it can be stored in an airtight container for up to 6 months.

What Can You Use Dehydrated Pork In?

Dehydrated pork can be used in a variety of dishes. It's often used as a flavoring ingredient or as a filling for tacos, burritos, and sandwiches.

It can also be rehydrated and used in soups, stews, and casseroles.

Can You Dehydrate Bacon?

Bacon is a great option for dehydrating because it is already so lean. There is no need to remove any fat before dehydrating, and the process will actually help to render out some of the fat from the bacon.

Cut the bacon into strips and then season with salt and pepper. Dehydrate at 145 degrees Fahrenheit for four to six hours, or until it is dry and brittle. Store in an airtight container for later use.

Does Dehydrating Bacon Mess up a Dehydrator?

No, not if you do it right. Dehydrating pork products is easy and bacon is no exception. Pork fat renders at a lower temperature than beef fat, so it's important to keep an eye on the process. If bacon is left in too long, it will become hard and brittle. 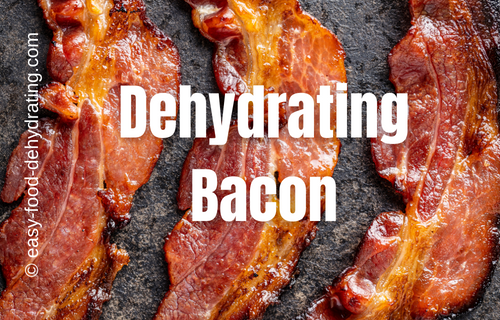 Here are Some Tips for Dehydrating Bacon: