Dehydrating Peppers is easy. These colorful peppers are great for stir-fries and omelets, just to name a few ways to cook with them.

Want to save on prep time? Then keep this in mind while you're out shopping: you can use frozen varieties too! Keep a lookout for "buy one / get one" sales.

The pics below are BEFORE—and after—dehydrating! 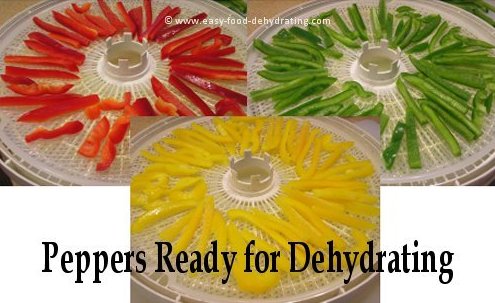 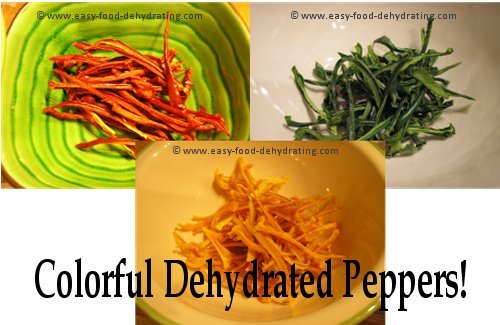 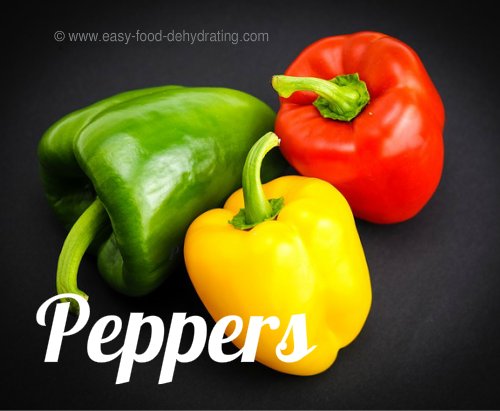 Peppers are not only colorful, they are a fantastic source of vitamin A—with the red variety being #1. The vitamin C leaders are the 'yellows'!

The champion Folate pepper is the red pepper! All three contain trace amounts of Niacin, vitamin B6, and Pantothenic Acid.

The minerals found in all three types are: a good source of Potassium, followed by Phosphorus, Magnesium, and Calcium.

There are trace amounts of Iron, Zinc, Manganese, and Copper. Selenium can be found in the red and yellow peppers, and Fluoride only in the green pepper! Green and red, but not yellow Peppers, contain Omega-3 and Omega-6 fatty acids.

For more on peppers and their nutrition, I went to WebMD and discovered their health benefits right here.

Why are there Red, Green, and Yellow Bell Peppers?

The longer a bell pepper stays on the vine, the sweeter and more flavorful it will become. So, if you're looking for a sweet, mellow flavor, stick with red bell peppers.

If you prefer a more sharp, pungent flavor, go for green bell peppers. And if you like something in between, yellow bell peppers are a good option.

Use Oxygen Absorbers in
Vacuum-Sealed Packs of Peppers

It's a lot of fun dehydrating peppers and getting them all chopped up in 'one go' saves prep time later on.

In my side-by-side photos, you'll see that I have made three separate bags with a combination of yellow, green, and red peppers—perfect for a stir-fry or omelet! Simply re-hydrate! They were originally store-bought three-to-a-pack, and that photo shows nine peppers total, so you can see how much room you can save by dehydrating them!

The blue packet, which is a 100cc oxygen pack, in the photo above, on the right, shows one vacuum-packed bag!

Click on the following links to find out more about oxygen absorbers and their important role in food dehydrating and safe storage, and how to vacuum-seal your dehydrated vegetables for long-term storage.

Try This Delicious Recipe
Ratatouille
Fill YOUR Kitchen with a Mediterranean Aroma! 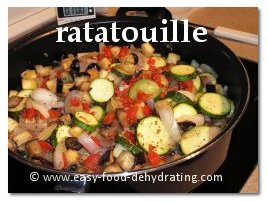 Try this fantastic dish of onions, peppers, zucchini and squash. It's known as ratatouille. Guaranteed to fill your kitchen with the fantastic aromas of the Mediterranean Sea.

Try slicing your peppers in different ways: in rings, "fat" slices, or thin slices... and diced!

Add orzo or white rice; the ratatouille recipe shows you how to do just that.

Different types of peppers can be distinguished by the amount of heat they pack. The Scoville scale is used to measure the heat of peppers, with the hottest peppers falling at the top of the scale.

Some of the world's hottest peppers include the naga viper, ghost pepper, and Carolina reaper. These peppers can pack a serious punch, and should be handled with caution.

For those who enjoy a little bit of heat, however, these peppers can add an exciting new dimension to your cooking. Try incorporating them into your favorite dishes for a spicy twist.

The Scoville scale is a measure of the heat of peppers, with the hottest peppers falling at the top of the scale. The scale is named after its creator, Wilbur Scoville, who developed it in 1912.

The Scoville scale is based on the amount of capsaicin, the compound that gives peppers their heat. The hotter the pepper, the more capsaicin it contains.

Do Dehydrated Peppers have a Stronger Taste?

Dehydrated peppers generally have a more intense flavor than fresh peppers. This is because the dehydration process concentrates the flavors of the pepper.

Dehydrated peppers can be a great way to add a bold, spicy flavor to your dishes. Try using them in sauces, soups, or spice rubs for an extra kick of flavor.